The other day when I was posting out some cassettes, the woman in the post office, off-the-cuff, said:

Oh aye, tapes are meant to be coming back into fashion.

Today a link has been going around about what is apparently the last remaining cassette duplication/production factory in the US, and it’s worth a watch. Only 3 minutes long, and pretty beautifully shot:

“There is no question that tapes are coming back.”

Turns out Rolling Stone penned an article on the topic at the end of last month.

A good time to get into the tape label business then, and a better time to check out what releases we have up for sale in the shop.

Cassettes were a big part of my youth. The first piece of music I ever bought was on tape; I’d spend hours creating custom mix-tapes with songs I’d recorded off the radio; and I even played games by loading them from tape onto the Commodore 64. CDs weren’t around until later, and nobody really released anything on MiniDisc commercially. My generation might like to pretend otherwise, but we didn’t have vinyl; we had cassette tapes.

Now, we almost have instant access to practically any of the music ever recorded through the Internet, which is a mind bogglingly amazing thing when you stop and consider it. As a musician, this is especially amazing. Technology has allowed us the ability to record songs in a way that was completely out of reach 10-15 years ago… but sometimes the process can feel a bit too virtual; confined to the computer from start to finish. There’s a definite longing to produce something that can be enjoyed in an analogue form, and not just resort to pumping out a CD that acts as a vehicle for MP3 conversion.

For that reason, I’ve decided to set up my own cassette tape label, to release my own music and the music of others that I find some sort of symbiosis with (in very limited numbers). Vinyl is great, but far too expensive to produce, and in any event, there’s something about the temperamental, quirky nature of the cassette tape that makes them incredibly appealing as a medium. Some albums are just meant to be listened to on tape. Try it out: find an old tape and take in its warbling imperfections and you’ll see what I mean.

The first release is ‘drouth’ from unexpected bowtie, an experimental electronic chiptune album that can be previewed for free (digitally) on our Bandcamp.

For £5 (excl. shipping) you get a hand-numbered, hand-painted cassette tape of the album in a pretty cool blue/yellow split shell – as well as some stickers.

There are only 5 copies available out of a total of 10 that were produced, so order here before they are gone forever. 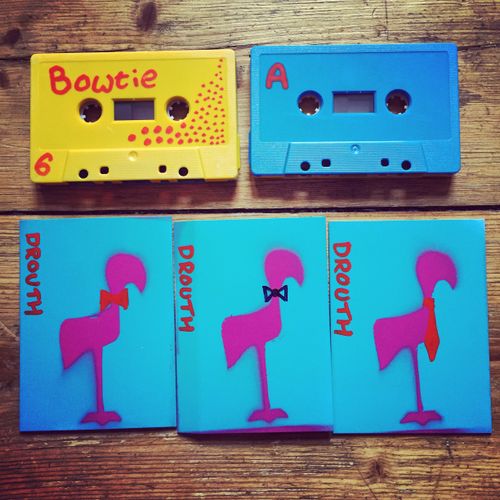